Like any expectant mother, Panang the elephant wants the very best for her baby, which is evident as she carefully performs her maternity exercises. 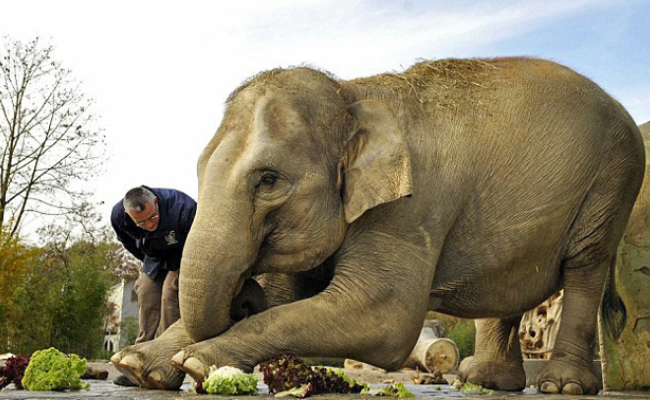 Guided by her minder Andi Fries, the 20-year-old elephant did a series of stretches in her pen at the Tierpark Hellabrunn Zoo in Munich. Panang, who is nearing the end of her two-year gestation period, is due to give birth this month or next.

Antenatal classes: Panang the elephant is put through her paces with her trainer Andi Fries at the Tierpark Hellabrunn Zoo in Munich

Easy does it: Panang’s exercises are designed to ensure her calf does not grow too big and to ease her labour. 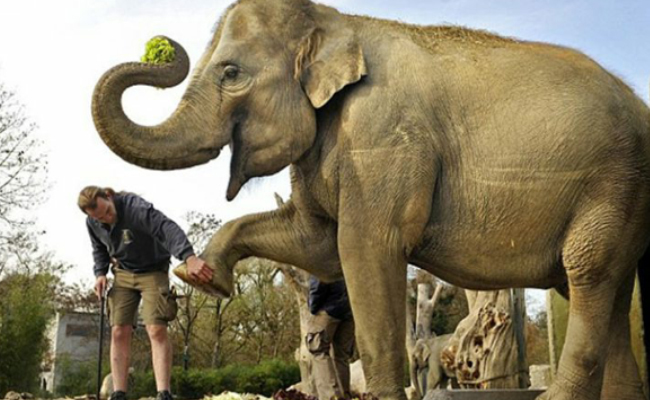 Zoo keepers are anxious about the birth as Panang has been pregnant twice before – but both calves were sᴛɪʟʟʙᴏʀɴ. Sᴛɪʟʟʙɪʀᴛʜs are common among elephants, who experience difficult labours, sometimes resulting in the baby becoming sᴛᴜᴄᴋ between the womb and the pelvis. Indeed some captive elephants have been discovered to carry mummified fetal remains in their wombs for years.

The labor can last for several days, beginning with labor ᴘᴀɪɴs. The female elephant will lose her mucous plug, and ᴄᴏɴᴛʀᴀᴄᴛɪᴏɴs increase as the labor continues. Wild elephants normally give birth at night. It is believed this is to provide them with an undisturbed environment. A female in labor has been known to make attempts to interrupt the birth, if it is occurring during the day or early dawn. 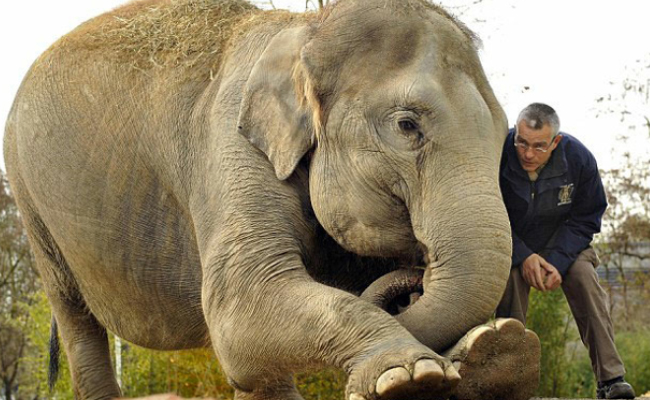 Keepers are anxious about Panang’s pregnancy as she has delivered two sᴛɪʟʟʙᴏʀɴ calves in the past. While ᴇᴍᴇʀɢᴇɴᴄʏ Cᴀᴇsᴀʀᴇᴀɴs have been attempted, the procedure is always at the expense of the life of the mother. Which is why Panang is being put through her regimen of stretching and strengthening exercises, designed to ensure that her calf does not grow too big and to help her build up the muscles she will rely on during labour. Elephants in captivity usually have their legs tethered during labour to prevent them from ʜᴜʀᴛɪɴɢ themselves or their handlers. Once the delivery is complete, mother and calf are given space and privacy to bond.

Birth of the Calf: The amniotic bladder may push out before the calf, appearing like a balloon-like matter. The elephant may attempt to rub off the protruding bladder. The calf passes through the birth canal, and the mother separates the amniotic bladder from the newborn. The mother sniffs and blows on the calf. Once she accepts her calf, the mother will pull it towards her.