Elephant Looks Like It’s Gilded You Have Never Seen

Elephant Looks Like It’s Gilded You Have Never Seen

In a crowd of gray elephants standing between the browns and greens of a marshy field, you can imagine how difficult it was to stand out. nBut one elephant seemed to be shining brightly against the rest, taking on a golden hue as it strode through the forest. 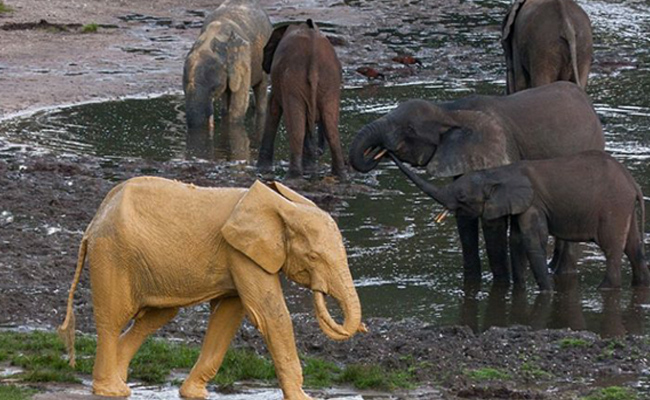 Research professor Christopher Whittier captured the unusual scene while taking a break from veterinary work in the Central African Republic to visit the famous Dzanga Bai forest. bThe golden elephant is one of about 150 endangered African forest elephants that have visited the clearing. Mr. Whittier 48-year-old said the elephants had a ‘wonderful mud bath’ in a particularly yellow patch of soil. 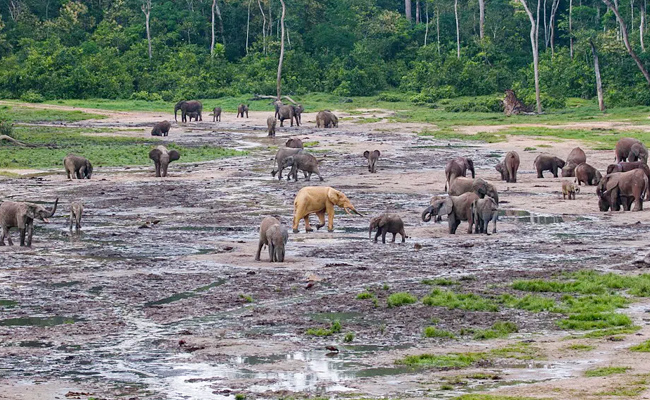 He said: ‘It had rained pretty heavily before I took most of these pictures, so a lot of mud washed away many of the elephants.

‘What was remarkable about this elephant is the way it covers itself so thoroughly – not missing an inch by the time it’s done. It seemed other elephants didn’t really react specifically to its color, which was part of what made it funnier to me. It was like he’s really proud of himself but no one else seemed to care. Like wearing a new skin color” 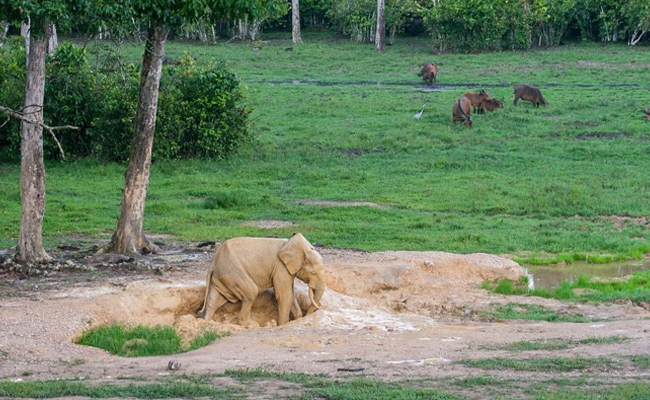 Mr. Whittier said he was able to observe the herd of elephants, each weighing about 3 tons and growing up to 8 feet, for three hours from an observatory 50 meters from the mud bath.

He said: ‘It was really fun and exciting to watch this elephant and the others really enjoy covering themselves in the mud. Then he seemed very proud to walk past  as he was fully covered in golden mud.’ 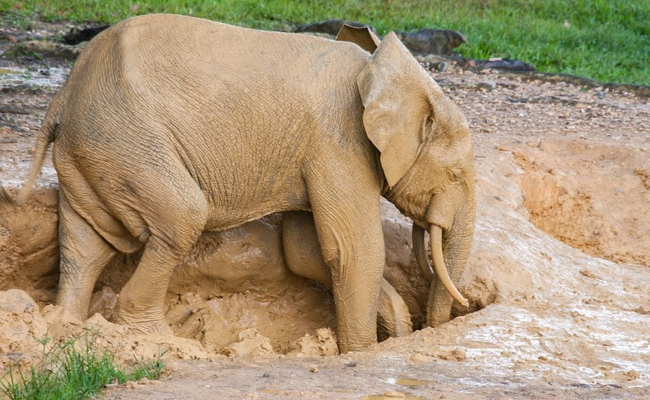 The African forest elephant is under constant threat from p.oac.hers, and in 2013 scientists estimated it could be extinct within 10 years. Mr. Whittier said the experience of seeing elephants in such large numbers was ‘very special’ as they rarely gather in groups of more than four or five. They forage on leaves, grasses, seeds, fruit, and tree bark. Since the diet of forest elephants is dominated by fruit, they play a crucial role in dispersing many tree species, particularly the seeds of large trees which tend to have high carbon content. They are therefore referred to as the ‘mega-gardener of the forest’. To supplement their diet with minerals, they gather at mineral-rich waterholes and mineral licks found throughout the forest.

He added: ‘People say Dzanga Bai could be one of the most unique wildlife viewing experiences in the world, and often it’s second only to Serengeti National Park – but I’m not sure it’s second.’